A series of previous posts reviewed the books nominated for the Paris Photo / Aperture First Book Award. Well, Paris Photo is now in the past and David Galjaard's Concresco (available here for 45 euros plus shipping) was chosen as the best of the bunch. It's a decision I heartily endorse. The book is a fascinating portrait of post-Soviet Albania seen through the lens of a peculiar phenomena -- the 700,000 concrete bunkers built over 26 years following Albania's break with the Soviets and designed to provide shelter for every Albanian against whatever foreign invader may appear.

Self-published in an edition of 750, the book has exceptional production values and an exacting attention to detail. Take, for example, the cover. 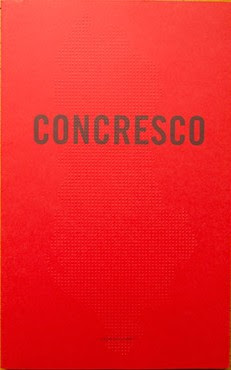 A simple, bold design in red and black pays obvious homage to both Albania (these are the colors of their flag) and the Soviet connection. A closer look displays a series of dots distributed across the cover in the shape of Albania. Holding the book, you realize these aren't dots, but rather bumps in the shape of the bunkers that protrude from the cover in the same way the bunkers protrude from the landscape. Thus, in tactile form, the cover embodies the book's central motif, the thousands of bunkers spread all across the country.

Inside, the book consists of beautifully printed, full bleed, double page spreads. Though in a couple of cases it is a bit like Where's Waldo, virtually all the photos have one or more of the bunkers somewhere. The exceptions? A few images of worker's clothing and tools, several shots of items on the ground (including a turtle who's shell serves as a metaphor for the bunkers), and the last image in the book -- a photo of various souvenir items, among them ceramic models of the pillboxes. Sequentially, the early photos emphasize the worker's clothing and tools and shots of the ground. Then follow the bulk of the images, landscapes with bunkers and the concluding image of the souvenir bunkers. Thus, the sequencing creates a movement, from construction, to experience, to memory; a movement that is reinforced in the accompanying texts. 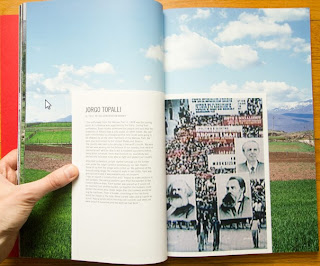 The most interesting of the textual material consists of a variety of small inserts that are spread throughout the book. These inserts document, in their own words, the experiences, memories and associations of individual Albanians with the bunkers. The spectrum of individuals ranges from workers who helped build the bunkers to journalists and academics reflecting on Albanian history and the the ongoing meaning of the bunkers. Take, for example, Ilir Mati: "Eventually we found out that these bunkers had nothing to do with war. They were related to something else: to power. People in power make those they rule do useless jobs so they can hold onto power. One of our famous writers Ismail Kadare has compared it to the construction of the pyramids. ... They had to work all their lives in order for the emperor to maintain his power. Similarly, over here, we were doing useless jobs to secure power for the regime, a power that seemed to be saying: 'I am useful to you. I saved you from war. I saved you from Nazis and Fascists.' This went on for a while, until one day the Berlin Wall fell -- and the bunkers fell too." 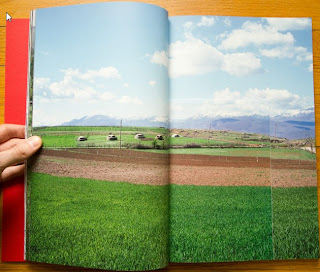 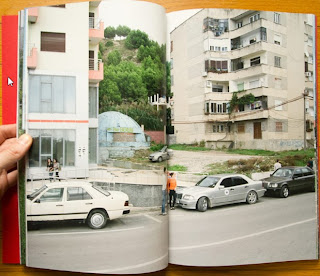 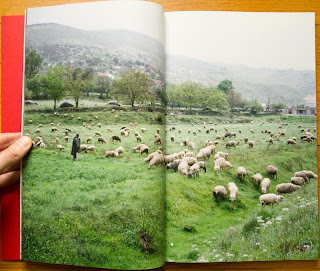 In short, a beautifully produced book that brings attention to a strange and perversely whimsical phenomena with deep and profound historical significance which continues to occupy the daily experience and the thoughts of Albania's citizens. As Galjaard puts it:


In this documentary, the bunkers are used as a visual metaphor in the telling of a larger social story. They help to paint a picture of developments in a country that was the last in Europe to renounce communism and has set out on a demanding quest to become part of the capitalist West.

In addition to the regular edition, there is a 150 euro Special Edition consisting of a signed book, wrapped in a handmade screen printed cover and a limited print (3x26 prints, size 24x30 cm) of one of three photographs from the series. Both the cover and the photo are numbered. Here are the three special edition prints (note: the center image has sold out and is no longer available).

Very highly recommended.
Video flip thru to be added shortly.
Posted by Gary at 12:21 PM